Usman vs Masvidal - in light of Burns doing to Woodley was Usman did prior to that, I'm less hyped by that dominating win by Usman than I was previously. The win over Colby was also just Usman being slightly better at the same gameplan as his opponent. Usman is a decision machine with only one stoppage in the UFC proper (Sergio Moraes by KO) and a finish on the TUF Finale ATT vs Blackzilians. Usman's sole loss is a submisson loss by RNC back in 2013. Masvidal is the polar opposite stylistically: his 3 stoppage losses date back to 2009, 2008, and 2005 respectively. He's dropped a number of close decisions and split decisions (Iaquinta, Khabilov, Benson Henderson, Lorenz Larkin, Wonderboy, & Demian Maia). As a result, coming into this phase of his career he has astutely picked up the finishing pace/strategy and put away his last 3 opponents (Till, Askren, Diaz).

Usman, I expect, will look to tie Masvidal up and press him against the cage and bodylock style drag him to the ground. Masvidal is always a much more shrewd gameplanner than he intimates via interview and with his persona. Seeing that footage of him drilling that flying knee heard round the world was akin to seeing MacGregor drill the exact finishing sequence he used on Aldo. Masvidal has always hidden what a calculated professional he is very well with his meme worthy interview gems. I don't think he was caught unaware that he and Usman would face one another in the next year. IN fact, I'm sure he has been working parts of a gameplan for Usman on and off this whole time. Usman to fight the kind of fight he did against Woodley and Colby has to spend long portions of the fight in range with Masvidal. At the outside he will set him up and tag him at reach/length and finish him, meaning Usman's gameplan has to be the Tyron Woodley/RDA pressure forward gameplan. I think that plays into Masvidal's hands and I think Masvidal hurts Usman and finishes him.

Volkanovski vs Holloway 2 - I see this fight going the same way as the first. Perhaps Holloway needed a break from carrying the hopes of this people et cetera, and this time away did him good. Perhaps the time as champ and fighting 5 round fights has taken its toll. I see Volkanovski coming in with more confidence than the first fight and tweaking some early errors in the first couple rounds at the outset. I see him winning by a wider margin this time.

Yan vs Aldo - Aldo can still turn in dominant performances (ask Moicano & Stephens). Then he can also turn in faded performances like both the Holloway fights & Volkanovski. Is Yan going to dominate Aldo with his punches? Punch centric fighters actually tend to give Aldo the best odds of winning. Yan has beaten several notable names on his resume (Faber, Rivera, Dodson) but his resume is nothing the likes of Aldo. To be honest, Faber is the only truly notable name that you can point to on Yan's resume. He decisioned Dodson and Rivera the 2 fights prior to that. Seeing Aldo's last performance against Moraes, I have to lean toward Aldo on this one. Punch centric fights favor Aldo, and Yan just doesn't have the resume to make me think he can beat Aldo 3 of 5 rounds, especially if Aldo is diligent early on with his leg kicks. They have been notably absent in the volume he once threw them with making me suspect perhaps his legs after years of damage in fights aren't up for high volume low kick gameplans, but his arsenal of other kicks to fend off the punch centric Petr Yan is definitely within Aldo's skillset and legendary resume. Aldo by stoppage in the 4th round.

Andrade vs Namajunas 2 - I'm always wary of fighters coming off of long layoffs and coming off a violent slam/stoppage loss to the woman she's facing in her return fight. That being said, I think it was a fluke and she got caught off guard and never seemed to get going in the fight TBH. She was coming off a long layoff after the back to back wins over Joanna and got blindsided by a bumrush fighter. Seeing Andrade get violently stopped by Zhang in her last fight should tell Rose that she can do it just the same (not to mention she stopped and beat Joanna who was the Cyborg of her division at the time, looking nigh unstoppable until it had been done). I think Namajunas starts the fight on her backfoot, sticks and moves until she's comfortable and picks off Andrade coming forward which has been done by a previous fighter who stuck to that gameplan (Joanna).

Elizeu Zaleski dos Santos vs Salikhov - love to see Elizeu Zaleski fight. He was on quite the streak there back when he had 7 wins in a row, but has since been stopped by Li Jingliang and a decision win over Kunchenko. I think he can easily put together another long win streak and fight for the belt and expect him to put on another entertaining winning performance.

Posted by Ze Grapplez at 7:14 PM No comments:


The first takedown in the HL below is me hitting a kouchigari off the grip, immediately upon contact at the start of a match:

Coming up to standing, I hit a kouchigari with a single leg grip/forcing his weight onto the target leg as he hops:

Fingers crossed we get to see Masvidal vs Usman. Let the MMA curse Gods take the weekend off and give us this last minute booking!

Posted by Ze Grapplez at 7:01 AM No comments:

Posted by Ze Grapplez at 6:59 AM No comments:

Kimura counter to a single leg with the head inside. Against opponents wary of the Kimura to the backtake/they keep their back flat on the mat, it's valuable to make them pay, give them a reason to get their back off the mat. This stepover Kimura+bicep slicer does just that and will work even if they grab their own belt, keep their hands locked as a traditional kimura defense. Be sure to punch the arm through the elbow space with enough depth to walk your hand down toward their arm, and rely on the rotation + stepover rather than hoping the pain of the bicep slicer is adequate for force a submission. 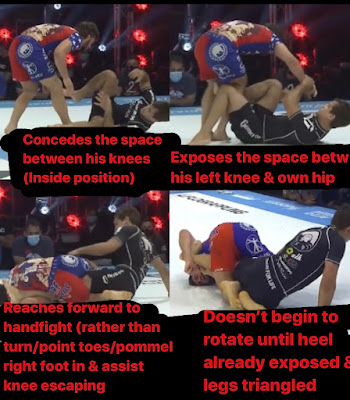 Posted by Ze Grapplez at 7:28 AM No comments:

The omoplata shoulder forward roll to pin or submission shows up. A number of inverted/crunch armbars used to sweep then pin. Lapel feed to amplify turnover power into a pin & stepover loop/lapel choke as well.

Posted by Ze Grapplez at 4:26 PM No comments: