Posted by Ze Grapplez at 8:11 PM No comments:


Missed the prelims by and large, was training, as I'm back doing select positional rounds in the Gi, it's been 3 months and a week since ACL surgery. I'm glad I've been thru this perilous phase before to know how to navigate training what I can but making sure to avoid re-injury.

At any rate, some thoughts: Boogeyman is a guy who either submits or gets submitted. I can always respect that about him. He showed that perhaps Miha's success on the European stage is predictably not an indicator of success against the top tier of talent and experience. A learning experience with some takeaways: holding onto the Kimura while your back is being taken by a guy as lengthy in frame as Boogeyman and tripod'ing up while your back is taken/body triangle was ill-advised. Thank God he was on the card b/c he and Uno were the only 2 submissions on the main card.

Uno picked up a deserved win over a guy his age. Remedios hung onto the lockdown to stall passing attempts, but left his left arm extended for periods of time and predictably, got reverse armbarred by the experienced Uno.

Lutes tried the Diniz both knees down, hand fight and throat post to stop most of Jones's attempts to invert and utilize his Z-guard, Jones also did a fair amount of wrestling in an effort I suspect to prepare for ADCC. For all his joking and nonchalant attitude, Jones is a sharp guy, as evidenced by his willingness to wrestle and pass in the time that's elapses since his last ADCC. Jones won based on activity, and Lutes being stymied with any real passing attemtps.

Rodriguez beat the brown/black belt Ash after some snapdowns and him remaining turtled as Rodriguez worked to take his back. The RNC came not long after the back was taken with Ash not controlling the meat of the hand and opting to try and pull down on the wrist. Blah.

Faber came to squat on both knees, and disengage when Nicky would look to post on the shoulder to expose his base. Faber for his part just cuffed with the forearm, posted on the throat, and did a lot of shoving but really didn't come close to doing anything resembling a pass attempt or a submission attempt for the entire duration of the match. He tried to roughhouse which comes off looking silly AF. I think the hardest job is a commentator trying to call it anything other than what it is, but when you book a non sport grappler to face a dangerous submission grappler, the guy is gonna get waxed or he's gonna do everything to avoid any prolonged grappling exchanges. Nicky had a deep leg entanglement on the border of the mat, and in the reset, Faber extricated enough of his knee to survive, disengage, and reset.

Ashley Williams got another gift decision (he lost to Imanari, f*ck what anyone else says, go back and watch the match, Imanari dominated with submission attempts) over Ethan Crelinsten. Ash picked up a period out of the 3, but no way he won 2 of the 3. For coming off of a long layoff, he kept pace for much of the match with Ethan, but having trained with Ethan a bunch, I can tell you Ethan sets a very, very, very constant pace which is hard for most guys to match for a 15 minute match. At any rate, it's good to see a lighter competitor back on the stage doing well, despite my misgivings bout the gifting of a decision to him for the 2nd time at this promotion.

Posted by Ze Grapplez at 3:36 PM No comments: 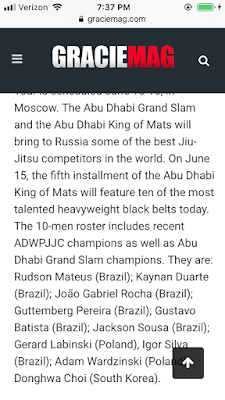 Posted by Ze Grapplez at 4:39 PM No comments:

Worlds body for Keenan coming in hot.
Rodolfo competing far away in MMA against a jacked looking guy.
Keenan says overlords at gyms want Keenan to wear their patch if he prepares for Worlds there (disgusting, right? hahaha shocker).
Polaris books Craig Jones vs Matheus Lutes. Nicky Ryan vs Faber still on tap for May 25th Polaris.