It's like Christmas. Let's all hold our collective breath that most of the guys avoid injury. From now until July 11th might as well be a year in terms of guys having time to get injured and become unable to fight. Fingers crossed, am I right?

Posted by Ze Grapplez at 6:30 PM No comments:

Small world, but the competitor Brian Mingia is a guy I know personally. He's longtime friends with my former instructor Billy Dowey (both Royce Gracie black belts).
Interested to see this show unfold much more so than the Road to Metamoris bits I've seen honestly.
Glad to see some quality production in a short season style show with a challenge and mini-challenges along the way.

I watched the current season of The Ultimate Fighter Wednesday night with a friend and training partner. It was passable as far as entertainment goes. The antics of the house and the guys cooped up together less so, but with figures like Ricardo Liborio, and Tyrone Spong mixed throughout, it wasn't terrible television (I guess). I haven't owned a TV since early in college when I gave mine to my younger brother and there's enough documentaries and Jiu-Jitsu on the internet to fill my time when I'm not working or training or with my girlfriend.

I don't know if it means I'm a hardcore BJJ enthusiast or a fail as a fan that I'll be reffing a Jiu-Jitsu tournament for Newbreed in Charlotte Saturday rather than watching Copa Podio. I have no desire to watch Metamoris as the card was lackluster with my only original interest in Satoshi vs Clark Gracie and the HW match-up with Cyborg vs Josh Barnett....the comments Ralek made about female grapplers notwithstanding. Now that Ryron will keep it playful with Josh Barnett for what should be about as much fun as teaching a white belt how to tie their belt, I remain wholly unconcerned with missing the event. I am ill that I'll miss Leandro versus Moraes but I don't think it will be competitive in the sense that Leandro has been 100% devoted to Sport Jiu-Jitsu and I expect Moraes to fall much the way of Durhinho whose time in MMA didn't crossover well enough to keep him a step ahead of the every dynamic Leandro. Leandro looked amazing at the Pan, falling only to Bernardo Faria in the finals of the open and made relatively easy work of Keenan at the Abu Dhabi Pro recently as well.

You can see the bracket HERE.
Erberth Santos who trains at the team whose name we will not mention had a disappointing show at the Brazilian Nationals and faces guys like Tim Spriggs and Vinny Magalhaes on his end of the group. Victor Honorio and Preguica are across the pond on the other side of the bracket/group.

Milton Vieira also has a NoGi match, the brown belt prospect Edwin Najmi competes, and of course Serginho Moraes rounds out the event.

Posted by Ze Grapplez at 2:16 PM No comments:

Alert the News Media! Ryron to Not Try and Submit in a Submission Only Match (Again)

I'll be reffing at the Newbreed Tournament in Charlotte that day, then working at my other job downtown back in Raleigh. Not even salty I'm missing this event honestly other than Clark Gracie vs Satoshi. Not at all sad I'm missing this one, even with the fail comments about women grapplers notwithstanding.

Last time Ryron did a submission only match he was eclipsed only by his good friend Brendan Schaub for all the not submitting he did.

You will never convince me that it's a big deal for someone who's been doing Jiu-Jitsu since they could walk that to just survive is impressive. Thanks for wasting my money. Keep it playful? Keep it unimpressive.
Posted by Ze Grapplez at 11:25 PM No comments:

Posted by Ze Grapplez at 2:23 PM No comments:

Was talking to my girlfriend the other day and mentioned I hadn't even looked at any upcoming competitions after my next superfight happens May 16th.


She responded, "that's probably a good thing," in her usual, concise way that means a lot more than it may state in words.
I asked her what she meant and she replied, "you don't seem to really enjoy doing Jiu-Jitsu lately. You're training hard and training hard but you've forgotten why you like doing it. It's like you've stopped having fun at all in training or remembering why you like doing it in the first place."

I've hit a point where I don't have many days I enjoy training. Training feels a lot like it did when I competed in Judo: training is for tournaments. It's practice. Practice doesn't feel or sound like fun because it's usually not. I've had one or two gaps in my training since being promoted to purple belt that total more than a few consecutive days off the mat.

Over the course of the past year and 5 months I've competed 22 times: 17 BJJ tournaments, 1 Judo tournament, and 4 Superfights. I've been to Delaware, Chicago, Norfolk, Richmond, Maryland, and Virginia Beach (among others) to train and compete.

The paradox of competing is on a day like today when I worked until after 3am last night/this morning, I'm still going to train at noon because this superfight for May 16th is booked. It's good because I'm going to train rather than go home and nap.
It's bad when enough days in a row you force yourself to do something and then you begin to resent it and training becomes a daily chore. There's going to be days when you're not feeling it but enough days in a row like that and it becomes problematic as the quality of the time spent training begins to decline and that emotional discord manifests in your performance.

I'd be remiss to not mention that a part of my discontent is training harder than ever before and not getting the results I want.
I can keep grinding because I competed at blue belt for quite awhile before I began winning divisions. I've always been an incremental learner (go read "The Art of Learning") and so I am intellectually and emotionally prepared for prolonged disappointment in the face of what feels like ever-increasing investment on my part. At blue belt I never even won a division until after I returned from knee surgery and was very much near the last 6 months of my blue belt time as it turns out before I began to win my division.

I've never found myself to be naturally good at anything. Even as a kid, when artwork and drawing were my passion(s), I would draw for literally 6-8 hours straight. That obsessive/addictive quality to my personality which has caused strain in my personal life, is also why I'm any good (if at all) at Jiu-Jitsu. I'm simply willing to grind and slog it through hours and hours and days and days of little discernible improvement.

The old adage that, "you don't love something until you've hated it," comes to mind. If blue belt (at times) felt like an interminable period of time, purple belt feels like a constant spring uphill in a wind tunnel with people watching. Granted, this is all self-imposed expectation and pressure of my own creation but as you get better, you begin to expect more of yourself and your performance in this positive feedback loop that builds over time.

When I get butthurt or aggravated about not performing as well as I would like, I remember Keenan talking about how he had been training a solid 5-7 years before he won anything of note or Caio Terra saying he thinks he was literally the worst blue belt in the world and that his coach gave him his blue belt out of pity.
Things like that keep me going when I'm working until 2am or 4am Friday night, waking up and driving to Charlotte by 830am, reffing and/or competing all day, then back in Raleigh Saturday night to work from 10pm until 3-something-am like I will this weekend....then Sunday morning up for Open mat.

At any rate, it's time to go train.

Posted by Ze Grapplez at 8:56 AM No comments: 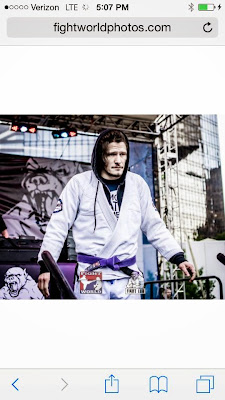 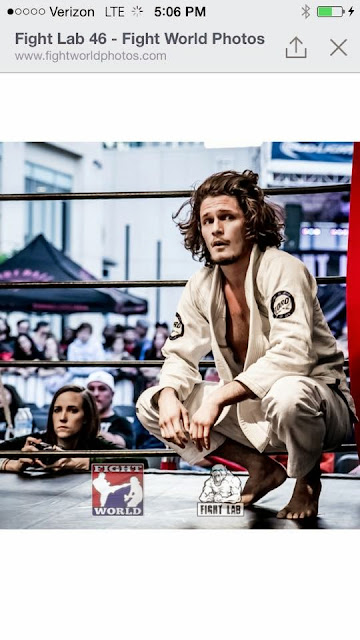 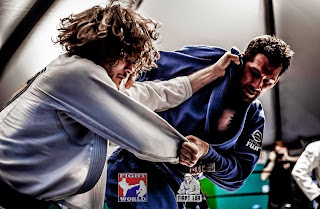 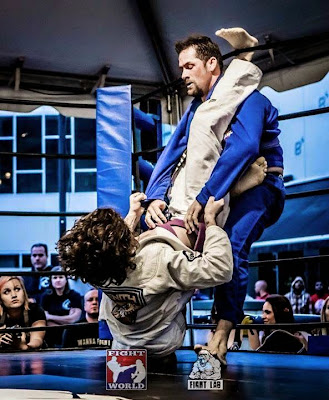 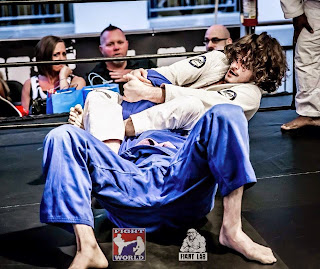 Superfight week after this one as part of the Toro Cup 2 at the Cageside MMA/Toro BJJ warehouse in Durham, NC. 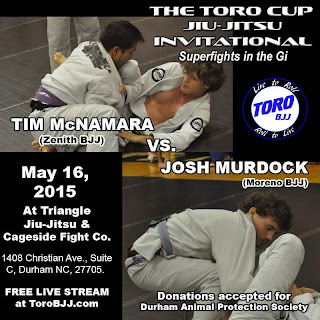 Posted by Ze Grapplez at 8:14 AM No comments: