Hopefully more than what looks like 20 people will show up this time.
The superstars of the sport clamored for a professional level event with cash prizes, but many notabls don't bother to compete.

I'm not quite sure what they want or what that means, but we will get to see some great match-ups regardless.

Click HERE.
Posted by Ze Grapplez at 11:19 AM No comments:

Well, despite my rantings decrying of the first two installments, the last Metamoris lived up to the hype, and this 4th one is steadily looking to be an interesting affair as well.

Galvao will attempt to stifle the American Gangster, Chael Sonnen, and Lister will jump up some weight classes to face Josh Barnett in a leg lock battle for the ages.

That being said, on to the trailers!
Let's hurry up and get to August 9th!

This weekend looms a return to the octagon for two of the more polarizing title holders in the UFC: Weidman with his back to back wins over Silva, arguably the GOAT, and Rousey whose dominance is not so much in question but rather her combative personality and penchant for outlandish statements.

I'm more interested in what would've happened had a pre-TRT ban Belfort faced the plodding stand-up of Weidman, but we don't live in that parallel universe, so we get Machida vs Weidman. Machida has slick stand-up when he wants to pick people apart, good movement, and has looked sharp and even more agile at this drop to 185.

As for Rousey, having seen her dismantle Sara McMann (probably one of the few women in MMA with the grappling chops comparable to Rousey), I hate to rain on the parade of selling this as even mildly competitive, but Rousey will armbar Davis in a round perhaps 2 at best.
Gotta call a spade a spade sometimes. That being said, Weidman coming off of some ring rust, facing Machida is a legitimate title fight to headline a PPV.

In other fights on the card, Stefan Struve returns from a potentially fight ending heart condition and faces Team Jumper Matt Mitrione, Alex Caceres who has surprised many with his abilities following his TUF season faces a HUGE jump in competition in the form of Urijah Faber.
The main card is rounded out by marcus Brimage and Urijah Hall facing foes respectively.
Overall, hardly a PPV worthy card, but hey, two UFC happened at the same time last weekend as well. I guess, that's something?

Another blogger with a passion for Judo and Jiu-Jitsu, Lex Fridman over at the Take It Uneasy Podcast has put together some great guests as of late.
This time out he chops it up with Ryan Hall who does not mince words in talking about his attitude toward preparation, training, failure, success, winning and general life philosophy.

"Show me a well-adjusted person, and I'll show you someone who's probably, frankly, not very successful."

Posted by Ze Grapplez at 7:10 AM No comments:

Stuart Cooper Presents: Kurt Osiander - My Goal is Not Just to Teach You Jiu-Jitsu

Injured my arm last week when a training partner hit a wrestling style switch, and I was belly down meaning: I couldn't extricate my arm before it was pretty violently hyperextended.

I did what I usually do which is rest a day or two (two in this case) then I rolled 6-7 hard rounds the day before competing in Richmond. The day after the tournament I wasn't satisfied with my performance so I rolled a solid 6-7 rounds but in my heart I knew I had to get my elbow looked at because the pain after training was growing in severity.

The good news is the orthopedist doesn't think I have any long term damage but I likely damaged my bicep and some of the ligaments but they will heal in 3-4 weeks with rest and ibuprofen.

Realistically there is no way I'll stay off the mats that long. I'll be back tomorrow with my arm tucked in my belt Jacare style and hope for the best.

I've been fortunate and not been injured since coming back from ACL reconstruction and I've been training like a madmen since before and even moreso after getting promoted to purple belt in December. Every day is a grind these days and I rarely take off more than a day at a time. Summer means training twice a day some days and I restless as hell just having taken 4 days off.
Posted by Ze Grapplez at 12:26 PM No comments:

The Miyao Bros - Why Do We Fall?

Good inspiration for every grappler out there.

Let's just hope it happens. Click HERE.
Posted by Ze Grapplez at 8:57 AM No comments: 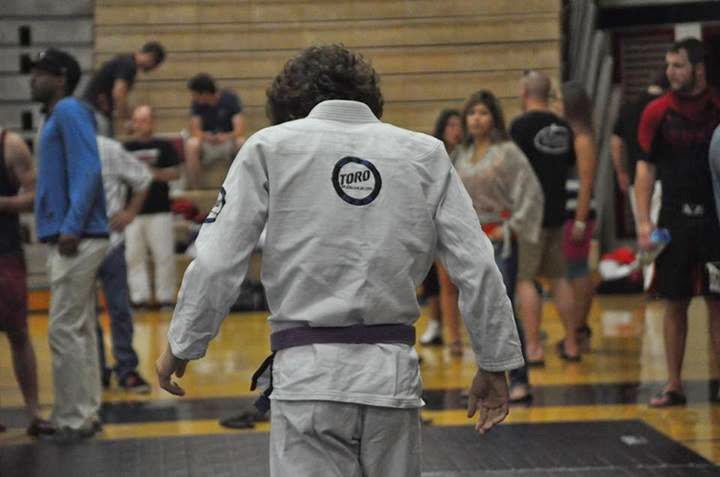 Had a great time competing, reffing, and coaching at US Grappling Richmond this past weekend. I took 2nd in the men's purple belt featherweight. My good friend over at Dirty White Belt was kind enough to take some amazing photos of the event. I rocked my Toro Gi by Cageside (pick it one up HERE). That being said, there's also a great charity fundraiser seminar coming up in North Carolina. Roy Marsh is a phenomenal instructor, someone who's had a huge impact on my top game and passing game, and a funny guy in general. Come support a great cause and learn some Jiu-Jitsu for your pajama wrasslin'. 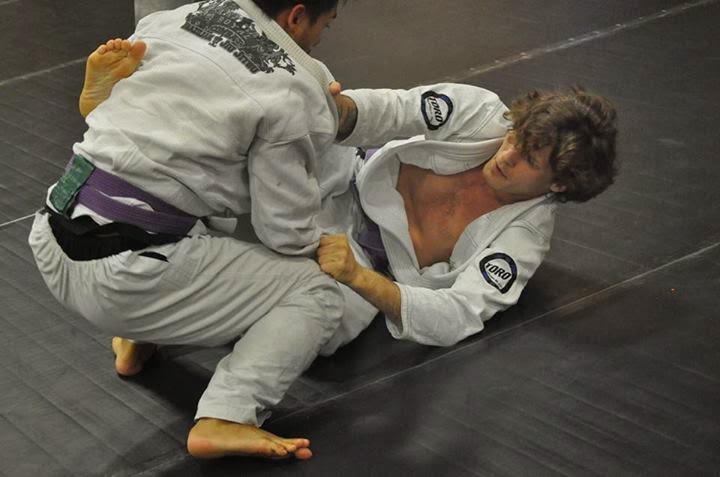 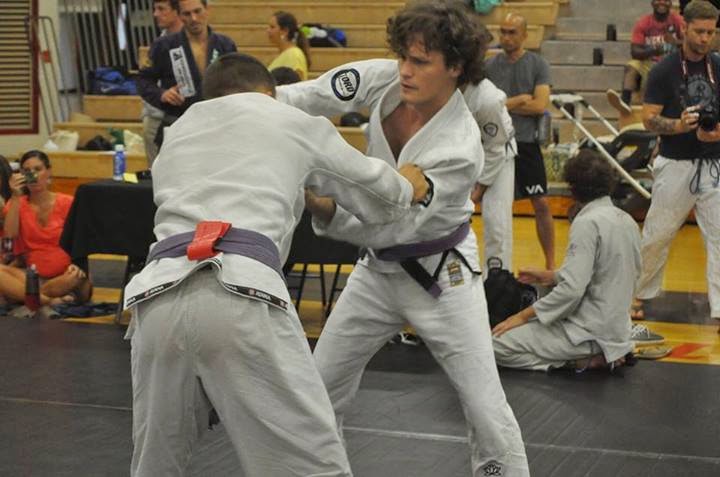 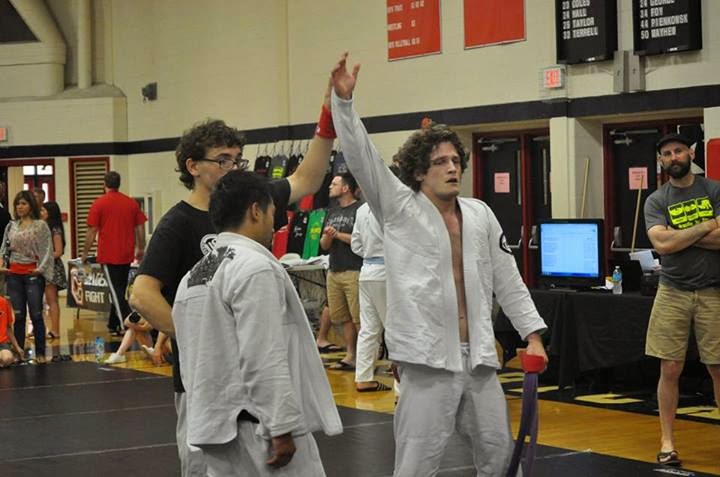 Posted by Ze Grapplez at 7:47 AM No comments:

Who is Murilo Santana?

As is usually the case, I'm late to the party with some things in the Jiu-Jitsu world. Back in 2012, Santana was winning the Brasileiros (beating another guy who would come onto the scene this year in the Mundials and Copa Podio - Felipe Pena), but I first noticed him in the Abu Dhabi Pro Qualifier up in America's hat (also known as Canada) with his old school, head first, face in crotch fundamental style of stack passing. He's really come to bear in the early part of this year with solid perfomances at black belt in the Mundials. He's also part of a renaissance in the stack pass which is a response to all the wild open guard styles coming to the forefront of sport Jiu-Jitsu as of late.


Here he is very briefly and coming about as close as I've seen many, many high levels guys pass Keenan's guard but Keenan recomposes. This is a great match for watching Murilo's low passing style with pressure versus a flexible and varied guard like Keenan's.

US Grappling Richmond This Weekend

I'll be reffing and competing this weekend in Richmond, Virginia for the professional folks at US Grappling.
As a competitor they run a superbly professional event, on time, with some of the best reffing I've seen at various Jiu-Jitsu events over the years since I began competing.

It's a points tournament (they also run amazing Submission Only events) and if you're anywhere near the area, come compete. Especially if you're a purple belt featherweight (my division).
Click HERE for more INFO and to register.

I'll be working at my weekend job downtown Friday night, then riding up Saturday morning to referee, compete, and then make the sojourn back to NC to work the door again downtown.
Coffee and Jiu-Jitsu to be sure.
Posted by Ze Grapplez at 11:40 AM No comments:

Mendes vs Miyao Brothers finals: get used to it for it looms on the horizon.
Cobrinha still hashed it out with Rafa, but Cobrinha must be nearing the tail end of his competitive career. This only threat to Rafa I see anywhere in the distance is spelled M-I-Y-A-O.

The booing of the Mendes brothers was not something I had anticipated. But, the moment the match became a hunt for the 50/50 on their part, the crowd was not enthused and truncated matches in stagnant sweeping back and forth positions have their detractors even among the most die hard sport Jiu-Jitsu enthusiasts.

Roger Gracie has stated he will return to Gi competition. Let that soak into your brain as the heavier weight classes have guys like Rodolfo, Faria, Buchecha, (Keenan looking competitive in the Open as well), and with Alexander Trans and the like, I find myself watching more heavyweight and ultra heavyweight matches than I have in a long time.

Worm Guard is here to stay/at least has become en vogue seeing it in a variety of weight classes as part of a larger lapel guard onslaught coming to high level and eventually low level events near you.

Caio Terra was out which made for an interesting bracket and it will be very interesting to see him and Bruno fight it out again along with Joao.

Posted by Ze Grapplez at 7:00 AM No comments:

Well....the berimbolo has spawned another evolution or shall we saw resurgence in the competitive Brazilian Jiu-Jitsu world. The crouching/stack/low pass approach to the myriad of guards that now face even the most ardent and dedicated guard passers. The stack pass offers safe haven (as much as can ever be found anyway) from spider and worm and de la riva guards. However, this combined with the ability of a high level player to invert and use their hips also means that this is a true position of attrition in which it may be an uninspiring 8-10 minutes to watch if neither players really opens up.

Just now a senior in high school, purple belt, and now world champion in the adult class at his belt/weight class.

Read HERE
Posted by Ze Grapplez at 8:00 AM No comments:

Posted by Ze Grapplez at 8:00 AM No comments:

Analysis and the like seems to be the next wave of Jiu-Jitsu's exponential growth.
Lukehart also has some analysis of Keenan Cornelius (pre-worm guard days) out there as well.

Posted by Ze Grapplez at 7:51 AM No comments: