Thesis Wednesday: A Fish Rots From the Head 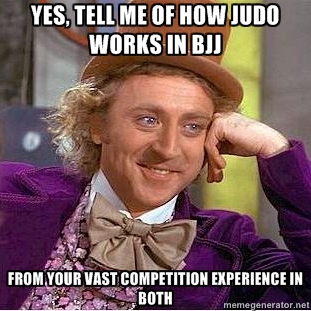 Disclaimer:
The following groups may be offended:
those who don't cross train.
those who believe their one grappling style by itself is the magical bullet to grappling invincibility.
those who can't admit what they don't know or understand.
those who have neglected to go experience and try other grappling styles firsthand.

I don't bother much posting on Judoforum.

When dealing with a certain sub-sect of long-time Judo players and associations, I'm fondly reminded that "The Turks have a homely proverb applied on such occasions: they say 'the fish stinks first at the head,' meaning, that if the servant is disorderly, it is because the master is so."
The sad part, is that I'd be willing to bet Judoforum is the biggest English-language Judo forum on the internetz.
Seriously.

Posters on Judoforum consist primarily of two classes: 1) those that acknowledge Judo must change adapt to remain relevant as a sporting endeavor and Olympic sport as well as self-defense applicable AND 2) those that lose their *&^% anytime someone questions the status quo of Judo. The interesting part is they freely admit Judo has changed from its early days, and yet, for someone who hasn't been playing Judo for 50 years to say change to the current paradigm is necessary provokes virulent responses.

It's primarily full of the stereotypical closed-minded older Judo players or the younger armchair experts who cant see the forest for the trees because they get a boner enamored with the bowing, and the respect, and "mutual welfare and benefit" and the talk of Budo and the like. All good traits IN MODERATION.
It becomes counter-productive, however, when they enter begin ignoring the ever changing world/landscape of martial arts.

I figured by posting in the "Other Martial Arts" section, I might get some feedback on my "Cross Grip Seionage for BJJ" from players who actually cross train. But....wait for it......

......as expected it so happens, it quickly degenerated into a "THAT's NOT HOW YOU DO IT IN JUDO" or "THIS IS NOTHING NEW" list of responses.

- "Doesn't anybody teach Eri seoi nage properly anymore? This is just reinventing the wheel ....but this time it's square!

And people wonder why Judo schools can't make a buck with dwindling enrollment while Tae Kwon Do schools make money hand over fist. It must be something other than a closed minded attitude on the part of a martial art that has been in America for 50 or 60 years. That certainly doesn't explain the lack of schools contributing to the stage for national level players and the fact that most Judo programs are non-profits taught on old mats at YMCA's.

Whether its a tourament director characterizing Jiu-Jitsu as little more than "dirty Judo" to the generalization that mat work in BJJ is too complicated and it doesn't work if you don't have all day.
I've heard the gamut of remarks.

The inculcation to ignore the fundamental reality of mat work and the likelihood that Judo players can learn from Brazilian Jiu-Jitsu begins early. For those first few white belts and up.
From instructors, a source that they respect and respect is emphasized in Judo passively and actively with the bowing et cetera admire, they often hear those first prejudices depending on their individual club and the instructors present.

This is the attitude of many grapplers.
There is nothing wrong with choosing to focus on a particular style of grappling.
I would argue that you need to have one base skill set of grappling before you begin cross training.
I'll use MMA as an example: guys walk in to learn "MMA" and they burn out and quit b/c they are trying to learn something new standing up, striking, take downs, and Jiu-Jitsu (plus diet, and strength and conditioning).

This results in being mediocre at everything.

Back to the grappling-centric world:
They may claim to be open-minded. They may claim to believe in Judo and the idea of using what works, but in reality, they adhere to and espouse a mythical belief in "standing Judo" and this golden age of Judo from the time of rose-colored glasses and how Judo is somehow so much better and superior special or different b/c of it's "mutual welfare and benefit" creed.
Again, there is nothing wrong with these ideas IN MODERATION..

The problem arises when grapplers would rather look at a book with grainy pictures of Kano or Mifune and argue endlessly about the sleeve hand being at this position or the rotation being exactly this many degrees. If you don't believe me, go read the forum for about 20 minutes and you'll see what I mean.


I say this not to disparage a sport in which I clearly believe and furthermore used to compete/fight/win in MMA, submission grappling, and Brazilian Jiu-Jitsu, but as evidence of a larger systemic problem.

When I google "Tae Kwon Do schools" and my city's name, I get 10 schools in a radius of roughly 10 miles, it proves that Judo has not faltered due to parents who do not wish to enroll children in martial arts.
It's proof that Judo has fallen by the wayside in recruitment.
Through apathy, or whatever, it proves that there is a body of students available, they simply have not been recruited.

It must be hard to teach grappling for 50 years, then this upstart style comes along and you're forced to acknowledge that you've never competed in it, don't understand the rules, and lack the information to present a truly informed opinion.

This blog is a testmanet to the crossover power of Judo in other sports.
But to do that, one has to at least have seen firsthand the alternative sport being discussed.
Or, God forbid, gone and done a class.

You can go sign up for a class.
Check your ego at the door.
Learn something, or you can stick your head in the sand.
Or you can pontificate about a sport that you've likely never even seen in person at a tournament.