UFC on FX 5 Hangover & the Groin Axe Kick of Doom 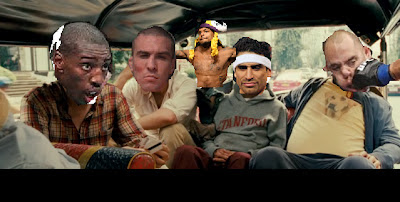 Been awhile since I picked this many fights incorrectly. Le sigh.
Browne's hamstring and in my opinion overconfidence led to a crushing right hand and loss for the guy the UFC brass clearly thought was the next big thing.

Hieron seemed content to try and pick Ellenberger apart from the outside. Unfortunately for Hieron, Ellenberger hit a couple more takedowns which is sadly enough to win when both guys try to out dance footwork one another with relatively unvaried punching combinations.

Palaszewski continued his erratic ability to win some fights and lose others he could have won. Credit to Nunes for beating a veteran like Bartimus.

Josh Neer lost to a guy I'd never heard of.

Dodson beat Jussier in what is quickly becoming the MO of 145 and 135 lb. fights with a lot of head movement, footwork, and punching combinations. I wouldn't have been surprised if it had gone an unexceptional 5 rounds if not for a sole punch by Dodson.

At least the always reliable reliably boring Volkmann grinded out another win so I called a couple fights right.
Posted by Ze Grapplez at 7:58 PM